Blog › Whatever Happened to the Golden Frog of Monteverde

Whatever Happened to the Golden Frog of Monteverde

Half Asleep in Frog Pajamas (a brilliant book by Tom Robbins) touches on the theme of climate change and the disappearance of frogs and led me to ask ecologist, Dr. Kara Lefevre to write an article on the subject relating to Monteverde Costa Rica 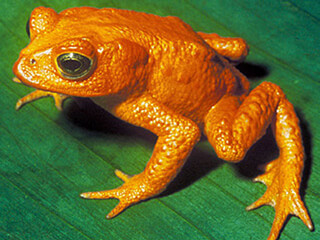 These changes in animal populations were simultaneous with shifts in the regional climate around Monteverde.  Over time, air temperatures are getting warmer, less precipitation is falling, and the characteristic mists of the cloud forest are becoming absent for longer periods during the dry season. These changes have the potential to alter the cloud forest ecology, which depends so heavily the moisture-laden air and soil.

Global climate change was first identified as the culprit for these changes.  Later research showed that deforestation in Costa Rica’s lowlands is actually having a dramatic effect on the moisture levels in higher cloud forests.  Further still, scientists have demonstrated a link between climate change and the spread of disease that may have been responsible for the initial frog crashes.

Read the full article to find out how these different sources of human impacts are influencing Monteverde’s cloud forest biodiversity and fragile ecosystem functioning.