The Farmers Market in Monteverde is a great success at last! For years local growers has tried to set up one in Santa Elena Monteverde but with no permanent location it never took off. Finally in 2008 the local high school built a gym and this seemed the logical place to put a Saturday market. The large gym has a kitchen area and plenty of space, plus lots of parking. The market is open from about 7.00am – 12.00pm.

For the price of $10, farmers are provided with a special metal display table or stall, and can set up every Saturday. The market attracts many local people, foreign residents as well as some tourists. There is a small kitchen area or kiosk run by local charity groups or community groups such as the scouts. Any profit from the kitchen is used for these community groups. The kiosk has a few tables and uses traditional cooking methods to provide local snacks and breakfast using products from the market. The kiosk is very clean, and a great, inexpensive way to try local Costa Rican food.

Many people recommend the market as having fresher and highly quality products than the supermarkets. The Monteverde Farmer’s Market also helps the local farmers, cottage-industries and offers a forum where local residents can meet every Saturday. Sometimes the local high school has special events or local groups have dancing and music to liven the atmosphere!.

Farmers Market Costa Rica - Meet some of the farmers below!

1. Orlando Trejos, from Monteverde, runs the Hidropónica de Monteverde. He grows arguably the best lettuce and tomatoes in the zone! He also produces herbs, spinach and other, mainly green-leaf vegetables. Using a system of hydroponic farming, plants are grown in a sand and water solution in plastic covered greenhouses. They have higher efficiency, use less space, have fewer pests (and so use fewer chemicals to control insects, and use more organic products). Orlando has been using this method since 2000 and has been involved in the market since 2008. 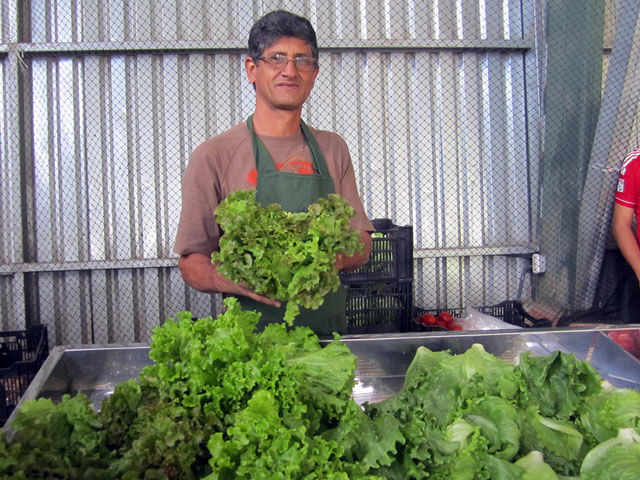 2. Guillermo Vargas Leitón and his wife Anna Ovares, from Monteverde, run the only health-food shop in Monteverde, located in Santa Elena, opposite the High School. They have had a stall on Saturdays since 2009 and bring fresh eggs, goat cheese and a delicious goat cream cheese with herbs (fantastic!). They also have a wide range of seeds and nuts, granola, peanut butter and other products - some produced in Costa Rica and some imported (products that cannot be grown here). 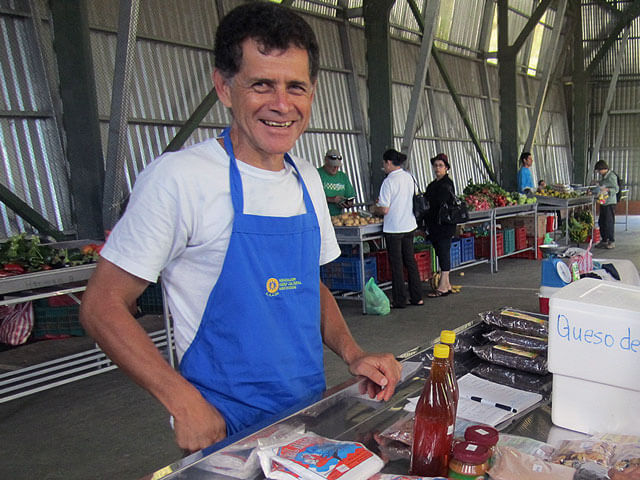 3. Herman Brenes from La Cruz (near the Monteverde area), has been bringing all sorts of vegetables from the farm that has been with his family for over 50 years. Herman has been with the market since the start in 2008 and uses 90% organic farming methods. 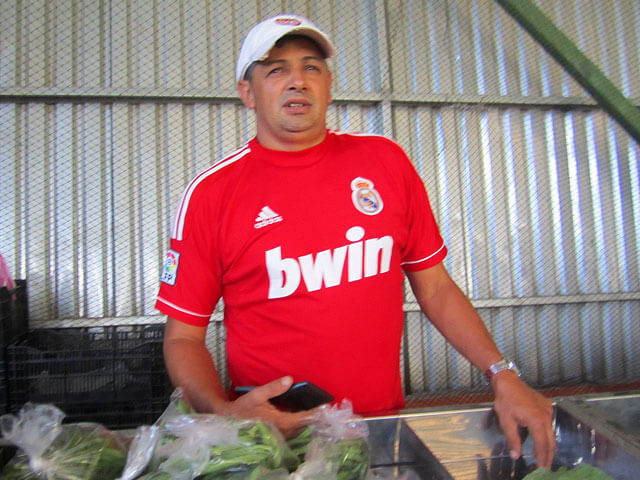 4. Felipe Rodriguez is from San Ramon. He recently bought his own farm (before that he brought other people’s crops to the market). He has been with the market since 2008 and also sells to the hotels in the area, as do many of the stall holders. Other members of the family go to the local market in San Ramon and to the central market in San Jose. Felipe proudly says he now produces 70% of his vegetables from his own farm. 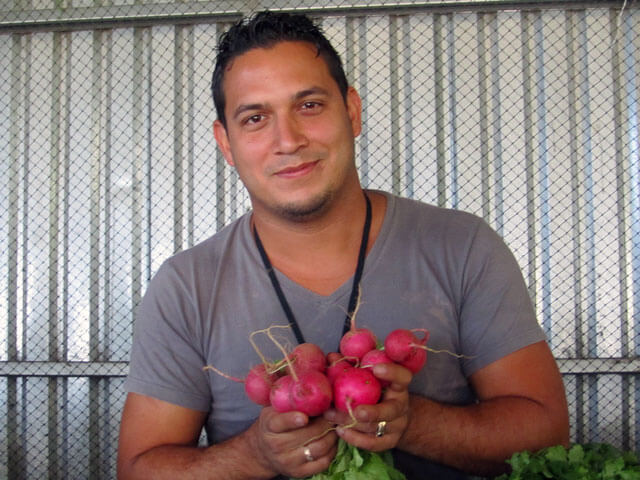 5. Sergio Pérez from Los Tornos (also near the Monteverde zone) brings local vegetables from his farm that has been in the family for 35 years. 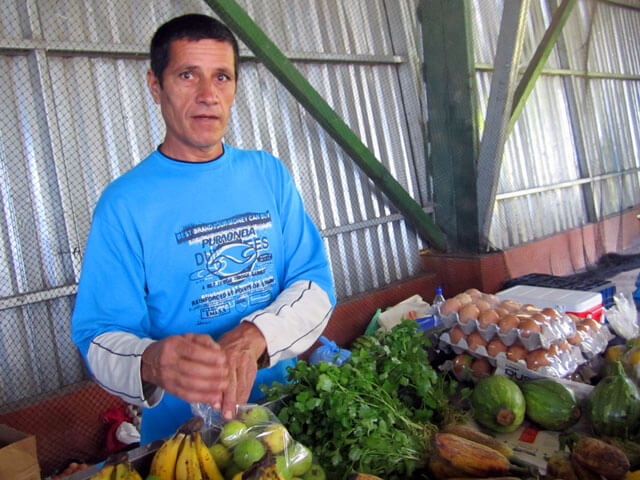 6. Gabriela Herrera, a young woman of 23 years old from Los Nubes (another area just outside of Monteverde) is a painter. She buys white ceramic molds and paints them in vibrant colors. It is a wonderful cottage-industry that she can do in the house with help from her family. She started painting these 4 years ago as a way of supplementing her income as a local painting teacher. She also sells the unpainted molds with a supply of different paints, so you can do them yourself. Her products sell from about $9 - $75. 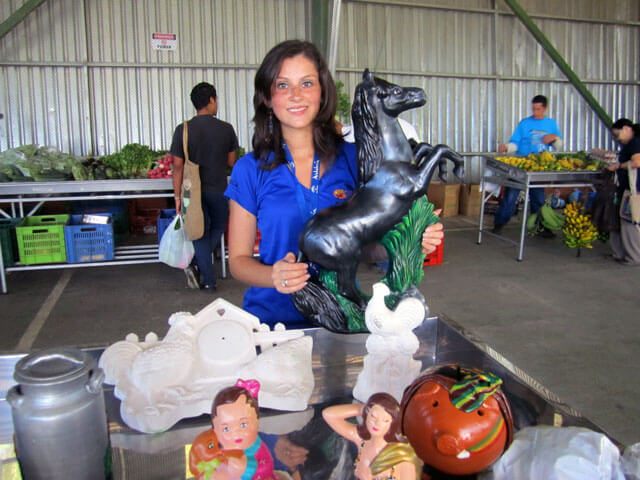 7. Oliver Garro has been part of Finca La Belle in San Luis for the last 12 years. He brings fresh chicken that are free-range and organically fed. Many just come to the market to buy one of his chickens as they are larger, tastier and fresher than those sold in the supermarket! 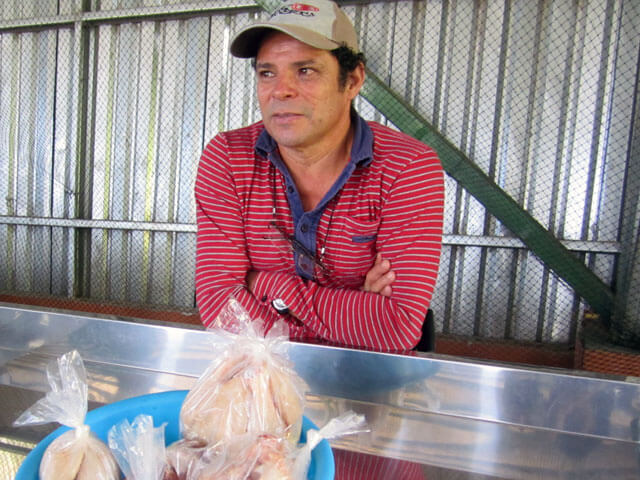 8. Eteluina Mendez from Monteverde has been with the market since 2008 and brings products from her family farm of over 30 years. She has fresh eggs, homemade cheese and sour cream. She sometimes experiments with the cheese and has produced some fine cheese with basil. 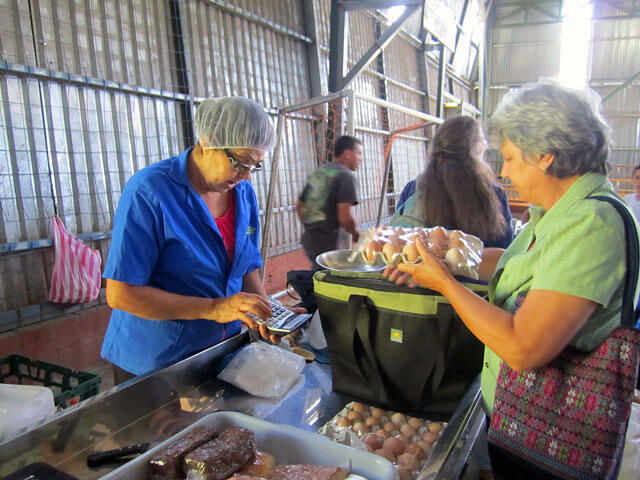 9. Noemi Cordero has been coming to the market since 2010 and has wonderful homemade bread, sweet breads and rolls. 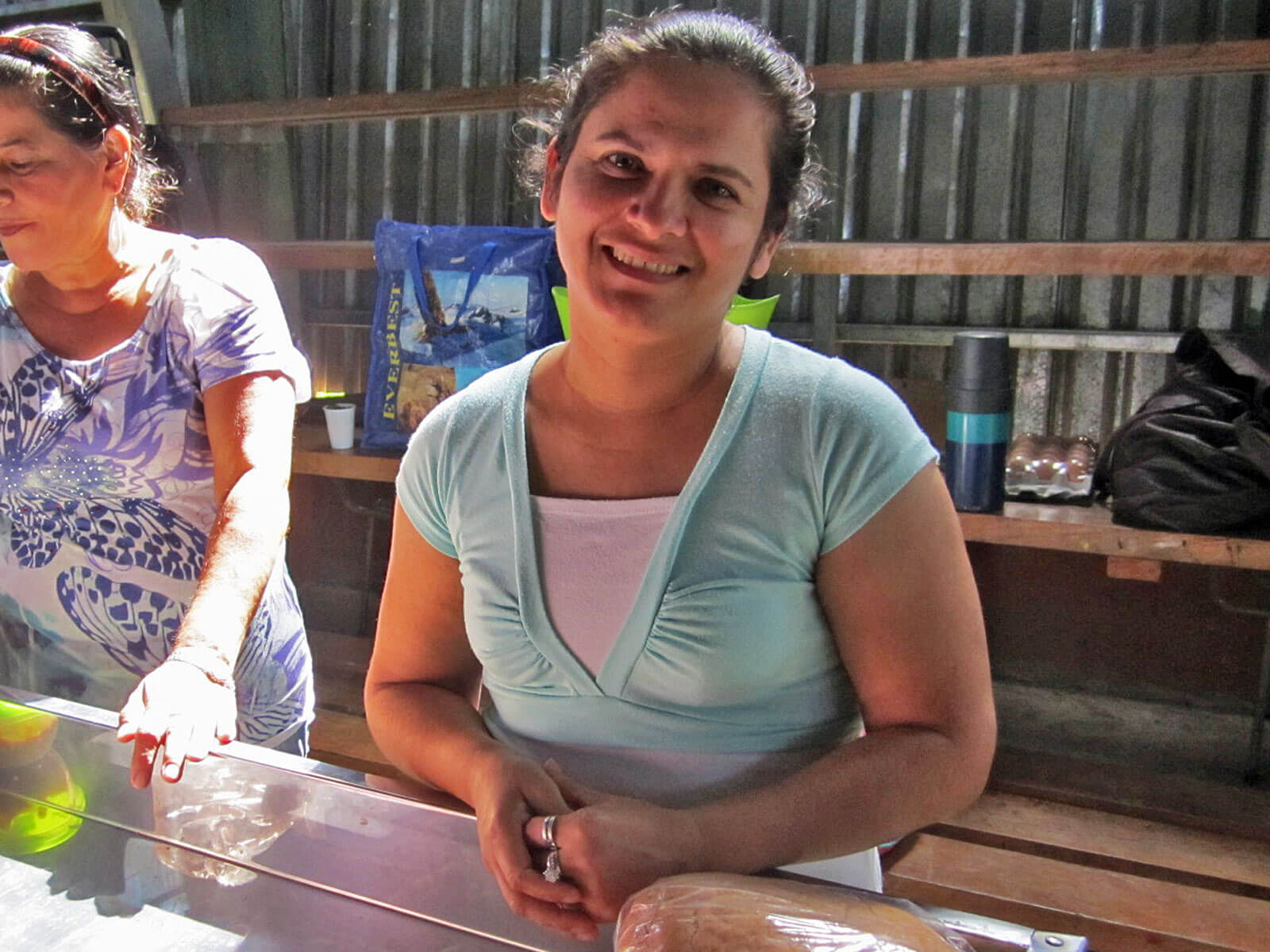 10. Esmeralda Bravo has been involved with the market since 2012 and makes delicious traditional tamales, corn-bread, sugar cane juice and other such treats! 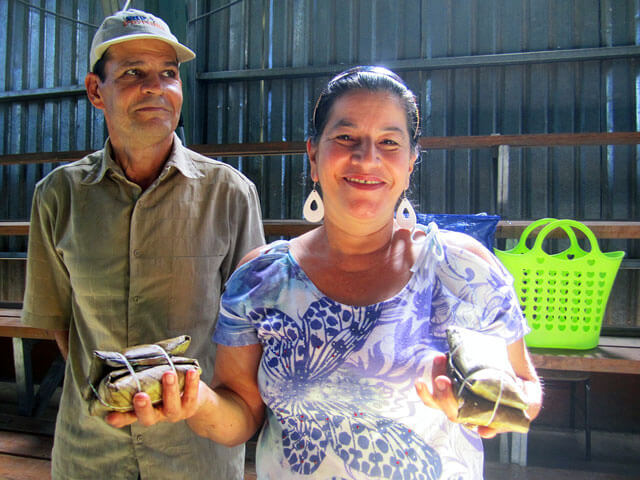 11. Mitzy is the daughter of the famous Ingrid Arias who bakes wonderful bread products using as many natural products as possible. She also makes delicious sweet products such as donuts and pies. Ingrid has been supplying to the restaurants for many years and is well known. She makes all the products at her house. 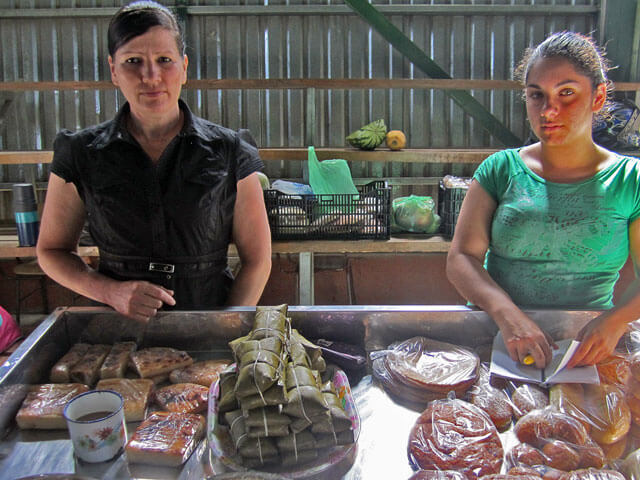 12. Junior Rodriguez brings his products from his farm that has been with the family for over 100 years. Junior has been coming to the market from Orotina, a much hotter region than Monteverde, about 2.5 hours away. He brings many fruits to the market, most of which cannot be grown in Monteverde and is a very welcome addition to the market. Junior says this is the only market he does go to and loves Monteverde for the people, climate and location! 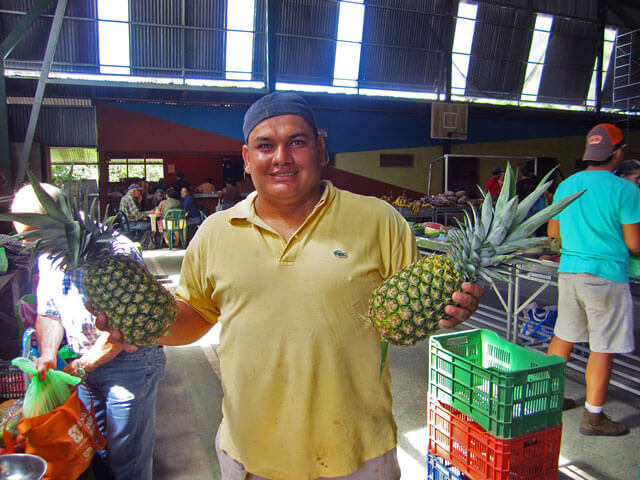 13. André Lopez comes all the way from Chachagua in San Carlos (over 4 hours away) and brings products from his family farm of 22 years. Other members of his family go to other markets but he loves Monteverde for the climate and people! His family tries to use as many organic farming methods as possible and his products are about 60% organic. 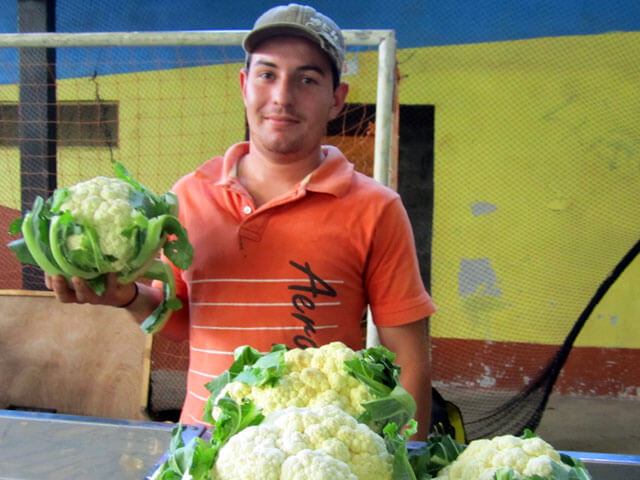 14. Emanuel Hernandez is from Monteverde and a chef. He is new to the market and sells fresh ceviche – a traditional dish is typically made from raw fish marinated in lemon or lime juice and spiced with peppers. He also brings some fresh fish to sell. 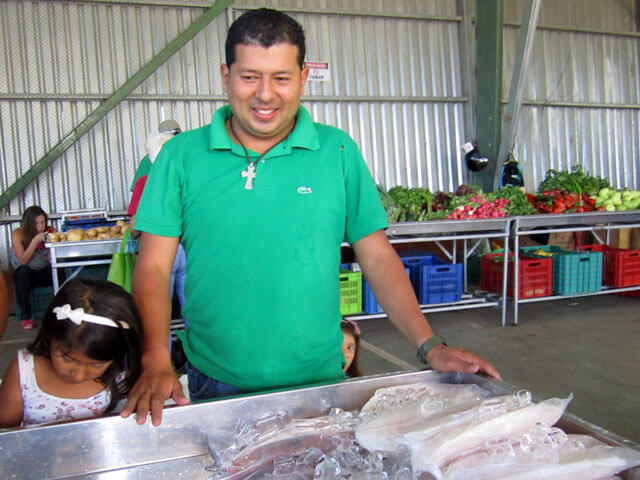 Ask a Question
or
Chat With Us
Have questions or need help? Chat with us